A defining leg of the Volvo Ocean Race, featuring the Southern Ocean, Point Nemo, Cape Horn, Roaring Forties and Furious Fifties; Leg 7 will sort the wheat from the chaff,  and it's worth double points into the bargain, reports Libby Greenhalgh.

At the end of Leg 7 you feel like you are on the home straight, the legs start getting shorter and the dangers at sea feel like they are less from there on in. For the Volvo Ocean Race it will mean you are over the halfway point with 7 of the 11 legs done, bearing in mind that in the leg to China everyone got a point, and the number of points left to win is rapidly reducing. Arguably this leg will play a key role in deciding the positioning of the fleet.

Let’s take a look at what the leg has in store in the big picture.

As crow flies avoiding the ice gate in the south the route covers roughly 6800nm obviously the boats always inevitably do more miles.

The only waypoints once the teams leave New Zealand is leaving Cape Horn to port and staying to the north of the Antarctic Ice Exclusion Zone which ultimately controls where the teams go as they head across the Pacific. 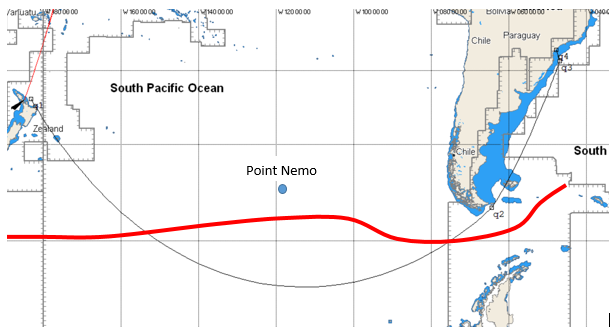 What and when are we going to see some of the key decisions being made in this leg, and where are the opportunities going to come from?

How far south do you go?

In the early editions of the race there were no limitations on how far south you went: it was a risk vs. reward decision on whether you wanted to be dodging icebergs but have more wind. Now the race is limited by an exclusion zone and ultimately this means the race never actually gets into Southern Ocean, which is typically defined as the sea to the south of 60S. But don’t let that get in the way of a good story!

When you look at the overall weather, much like the South Atlantic High or the Azores High, the South Pacific is dominated by the south Pacific high pressure system that sits at subtropical latitudes and acts as a blocker to developing low pressure systems, generally forcing them to the south and creating the roaring forties, furious fifties and the screaming sixties, linked to the latitude and the increasing wind strength you generally get. 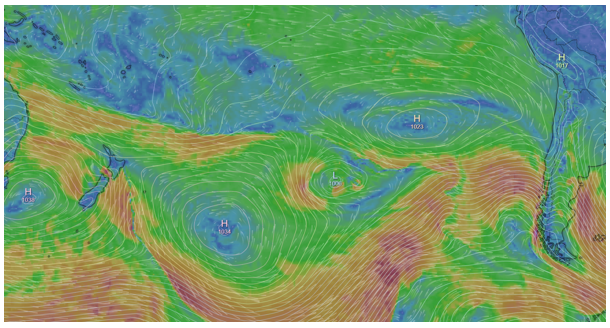 Negotiating around this high pressure system and hooking into the stronger winds to the south shown clearly above by the orange and red colours is the first goal. Most likely teams will be trying to position themselves to catch a frontal system and stay with it as long as they can.

This edition, the ice exclusion is notably lower than the previous race and crews will be squeezing themselves along it once again much like in Leg 3 because ultimately there is more wind the further south you go.

We saw in Leg 3 Mapfre and Dongfeng in a gybing battle along the ice gate with two periods of 24hours where these two teams really laid down the gauntlet and gybed almost every hour. It is a difficult balance between keeping the crew rested and in one piece and getting the gains from gybing for the shift or pressure. This was a move that paid dividends for these two crews and this leg will be no exception the only difference is the other teams have learnt and improved from Leg 3 and will likely be able to mix it up a bit more.

The Iconic point of this leg. More people have climbed Everest than rounded Cape Horn, a truly special moment in the race and a bonus point for getting there first this time. Which is likely to be a closely fought point given last edition where three boats were within a few miles of each other. 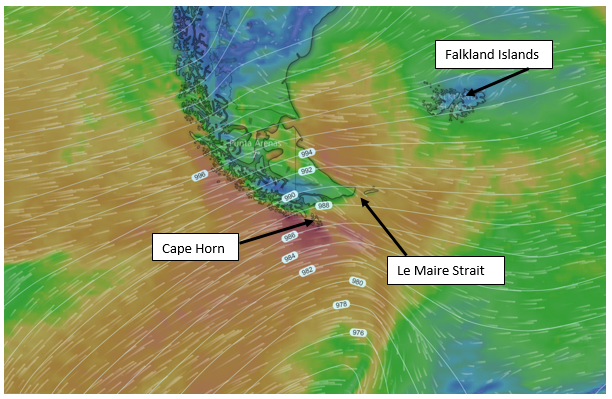 Following Cape Horn is where we see the options open up again of where teams strategy may differ and potentially some big splits and opportunities will develop for teams to get back into the race.

The first decision is whether to cut the corner and go through Le Maire Strait which can have very strong tidal flows from 3-10KT creating tough sea conditions. Clearly timing wise cutting the corner may work for some teams and not others, but it is also setting you up for your bigger positioning on the 2000nm home straight to Itajai and determining your strategy relative to the Falkland Islands.

In the image above you can see how in a westerly airflow  there is a significant wind shadow on the Falklands islands and in this situation you would potentially go to the east of the Falklands but the final 2000nm can be quite unpredictable.

All aspects come into play as the teams head north with cold current pushing north from the Falklands and the having a good understanding of where in the weather pressure systems you are with the biggest mile loser being when the high pressure bubbles over from the W and you haven’t positioned yourself far enough east. Monitoring the systems in the build up to this decision will be key to determining the east-west positioning a team takes. 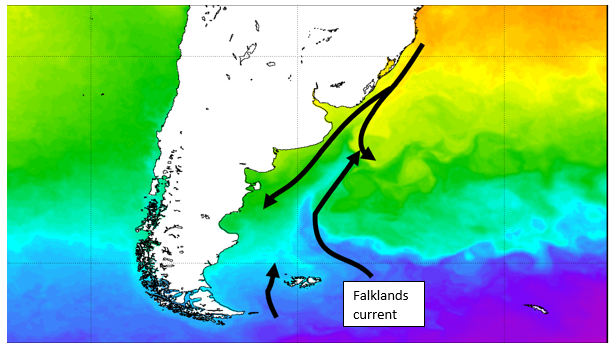 Teams can be 12-24 hours apart at this point and therefore have different strategies and positioning and be able to get right back into the race, so I expect this to be another absolute nail biter!