A short history of Sailing Instruments

The 1980s were the first decade of development for modern, integrated sailing instrument systems, and it had been quite a ride for those involved. “It was a pretty hectic time, things were moving on pretty fast,” said Richard Russell, who was with B&G through that decade, and ended it as B&G’s Yacht Systems Design Manager.

“The IBM PC didn’t come out until ’81, and really there was a very limited amount of microprocessor-based instrumentation around at all.” The most basic of concepts that we now take for granted -- like menus with sub-levels -- had to be worked out from scratch. “And you’ve got to bear in mind the amount of effort that went into making sure that they were suitable for the environment they lived in,” he added, somewhat ruefully.

By the beginning of the 1990s though, the sailing world had what is recognisable as a modern system. The launch of B&G’s Hercules 690 is a good example. It had all the essential functionality that we would now expect of a yacht racing instrument system. Two separate processor units integrated raw data from the sensors into performance data, and then distributed it to a set of displays, each capable of being programmed for specific data channels. A modular design allowed for expansion of both sensors and displays, while a new proprietary bus handled all the communications between the processors and displays. 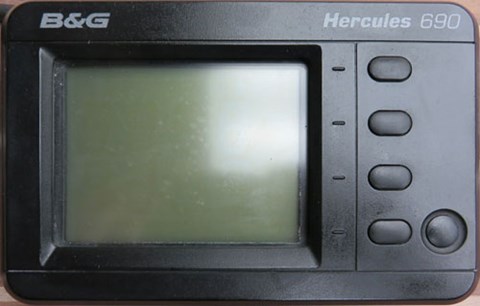 It was far from the only new system launched in this period; in the US, Ockam continued to push forward, launching OS2, a development of their tactical and performance software. Also based in New England, KVH were a leader in the development of digital compasses for the race-boat market, and for a while they were also instrument manufacturers with the Quadro system, which they took over from Denmark’s DanaPlus. In France, NKE launched a new system in the early 1990s. There was a strong offshore influence to NKE’s work, with Alain Gautier using the equipment to win the Vendee Globe in 1992.

There was also plenty of research and development going on outside of the commercial world. One of the most notable efforts in this period was built for Hasso Platner, well-known for a series of famous and successful racing boats – not to mention the database software business SAP. Platner had plenty of engineers to help, and while I never saw the system it was reputed to have functionality that wouldn’t have embarrassed an America’s Cup team.

Inside the Cup teams there was new work on sail vision, and the use of laser range finders to track the opponent. Unfortunately, as the teams became bigger, more professional, and longer-lived, less and less of this work crossed over into commercial products, or even saw the light of day in the public sphere.

One development programme that did start with the Cup and then move to the ‘real world’ was Matthew Thompson’s Kiwitech. He was with the New Zealand big boat challenge in 1988, and went on to build onboard tactical, navigation and performance analysis systems. These were bought by Raytheon in 1999 and became Raytech.

The Cup teamshad led the way with waterproof on-deck tactical systems, then in 1987 Sailmath developed the original commercial Deckman hand-held waterproof unit based on work by Derek Clark. In 1992 this was relaunched with new hardware based on the ‘brick’ shaped TouchPC. The TouchPC was also subsequently adopted by Ockam as the ESP, running their OS3 onboard tactical system. The durability, size and weight of the TouchPC meant that it remained the weapon of choice for many day-racing and short offshore navigators until there was a satisfactory way of bringing on-deck charting systems (that ran on laptops) up on deck. 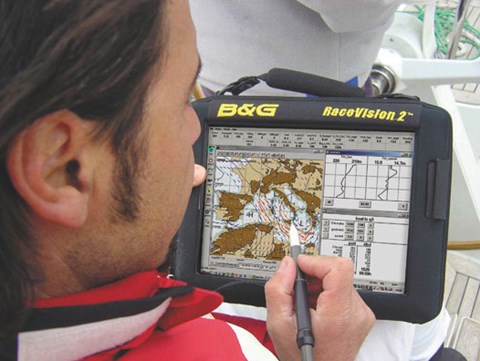 There were significant developments in these systems; software packages focused on long-distance offshore racing and the ‘downstairs’ navigation required. It was Brice Pryszo who developed the first isochronal solution for weather routing, and his MaxSea software had led the way in this area since the mid-eighties. Sailmath joined the game with the launch of Deckman for Windows in the mid-90s – essentially the Deckman software ported to the Windows platform. This enabled the development of much greater functionality, and weather routing with third-part forecasts was added for the 1997-98 Whitbread.

Nick White’s work on Explorer [later to be Expedition] also started in the mid-nineties. He was the navigator aboard Yamaha in the 1993/94 Whitbread and went on to work with Chris Dickson’s 1995 Cup campaign, Tag Heuer. He also contributed to the Kiwitech products. Explorer grew out of this, being renamed Expedition during preparation for the 2003 America’s Cup when White was working with Dick McCurdy at Dennis Conner’s Stars and Stripes team. 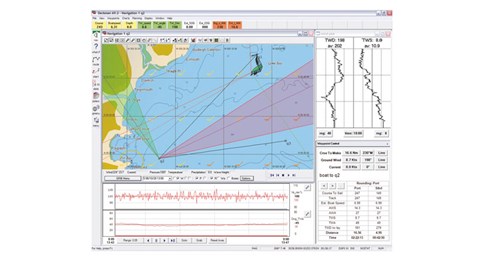 While the core functionality had been achieved during this period, I think it’s fair to say that there was still some work to do on accuracy, particularly during manoeuvres as the boats got faster and more dynamic. So for me -- if the arrival of GPS was the defining change in the 1980s -- then the most significant technical development in the 1990s was the availability of lightweight, robust, solid state motion sensors.

Rate gyros and accelerometers would come to be fundamental to many of the improvements in the accuracy and effectiveness of sailing instruments over the next couple of decades. It was Graeme Winn at Sailmath that first applied their potential to sailing after his involvement with the Blue Arrow challenge for the America’s Cup in 1988.

Blue Arrow built a foil-assisted monohull (the AC75 is not the first) and needed to measure the loads in the hydrofoil beams. So Winn had built a bespoke instrument system in collaboration with B&G. “The development ended when the Blue Arrow syndicate closed,” explained Winn, “but it formed the basis for a new system for the 1995 America’s Cup which became the WTP.

“It was first used in 1995 by the Spanish team [Copa America '95 Desafio Español]. The new feature for this system was the removal of wind vectors created by the pitching and rolling of the yacht by the use of rate gyros for [measuring] pitch and roll; the resulting wind was much steadier and required less damping.” 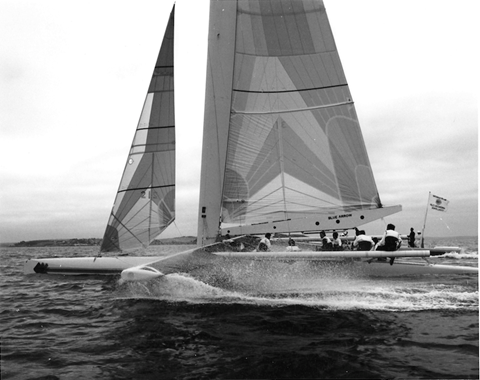 The error induced in wind direction and angle by pitch and roll had been highlighted by Dick McCurdy all the way back in his 1968 MSc thesis, and fixing it meant a significant step forward. Graeme Winn added another rate gyro for yaw to the WTP a couple of years later, and so provided the functionality of a gyro-stabilised compass.

Lightweight, robust, solid state motion sensors were also put to excellent use in an autopilot launched in 1995 by NKE and called the Gyropilot. It particularly improved autopilot performance downwind with spinnakers up. They also now produce an instrument system that uses rate gyros to eliminate boat motion from the wind data.

The WTP’s use of rate gyros meant that the wind data and everything calculated downstream of it was much less noisy than it had been, and with the consequent ability to reduce damping, there also came a much-improved update rate. “It was possible to lift the system sampling rate to 10hz and to output the important sailing variables like heading, boatspeed, wind direction, true wind angle and speed to the displays at the same rate; this makes for a very responsive system with more dynamic numbers,” explained Graeme Winn. The WTP became the system of choice for America’s Cup teams in the late 90s, and its specification was the ground zero from which new systems were developed as the new millennium commenced.

In the next installment, Mark Chisnell tells how the search for accuracy really takes off...