Sign up here to be the first to read our updates

SailGP has opened for business; the brand-new professional sailing circuit launching on a beautiful summer’s day on Sydney Harbour on the 15th February. The home team fronted by skipper and helmsman Tom Slingsby came away with the win and we’re going to look at the key moments on the Aussie’s road to victory.

Anyone that watched the last America’s Cup in Bermuda will be familiar with the race course; a reaching start takes the boats to a windward mark and onto a downwind leg. They then complete a number of laps of the windward/leeward course (with a gate at both ends) selected to match the race length decided by officials. The overall SailGP competition format is explained in this video .

The breeze in Sydney Harbour was light for this opening weekend, down to five knots at times, but it was mostly enough to get the boats foiling. This put a premium on getting and staying airborne, particularly through the manoeuvres – a race winning skill that we saw from the get-go.

Clear cut favourites going into the event were Nathan Outteridge representing Japan; and Tom Slingsby and the Australian boat. Neither looked like regatta winners off the start line of Race 1. They both got much too close, too early as we can see in Image 1, both boats luffing hard to kill speed while the rest of the fleet were already rolling down to accelerate. 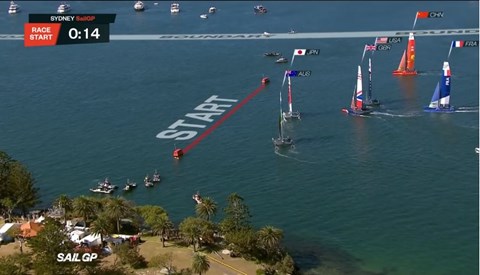 Japan were last off the line but passed the Americans before the first mark. It was now that Outteridge made his race winning move. The leading pack had headed towards the boundary after Mark 1, but they were sailing into lighter wind and starting to slow. The Japanese came around Mark 1 and rolled straight into a gybe as we see in Image 2. They did a much better job of the manoeuvre, and at this point were already going four-plus knots faster than everyone else on port, even though they started the gybe last. 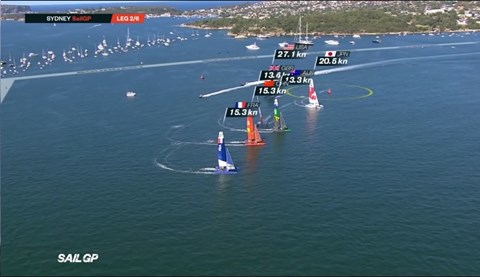 The Japanese continued to accelerate and just rolled over the top of the pack. They took the lead from the Chinese on the next gybe – again by doing a better job of the manoeuvre. Phil Robertson tried to defend by gybing in front but Outteridge had more speed and just blasted past as we see in Image 3. Game over, Outteridge led from there to the finish. 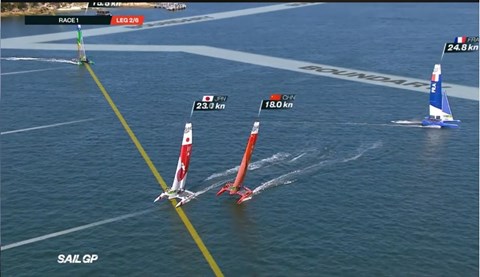 Nathan Outteridge compensated for getting too close to the line too early in Race 1 by making a long high-speed run at the line in Race 2, only to go over early. It was Slingsby and his Australian team that really made up for their earlier start line failings by winning the leeward end as we see in Image 4 – a strategy that worked for him pretty much the rest of the weekend. 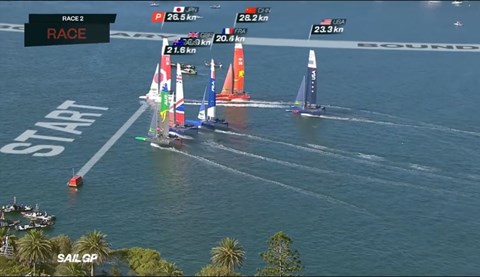 By Mark 1 it was a two-boat race, the Australians overlapped with the British, steered by Dylan Fletcher. Slingsby gybed the Aussies away first, while the British went to the boundary. It kept Fletcher in clear wind and good breeze, and they were ahead at the next cross with the Aussies laying the gate (two blue marks) as we see in Image 5. The Brits had every opportunity to gybe ahead and round in the lead, but for some reason they sailed past the layline, and the Australians blew right by. Game over. 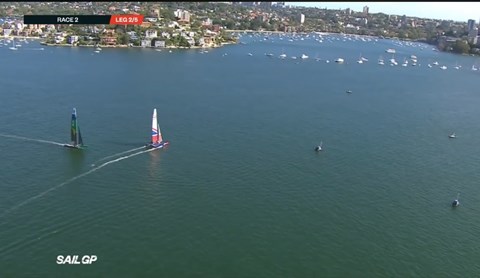 This was won on the start line by the Australians. They set up with a nice controlling position to leeward of the fleet that went unchallenged. The whole fleet looked a little line shy, all of them accelerating late including Slingsby. The result was that the Aussies owned the line on the gun as we see in Image 6. Slingsby wasn’t about to make any mistakes from there. Game over. 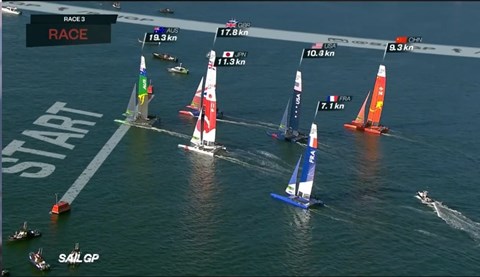 Tom Slingsby started Day 2 the way he finished Day 1 with another beautifully timed leeward end start – fastest, closest to the line and in the controlling tactical position as we see in Image 7. Once again, it was game over. 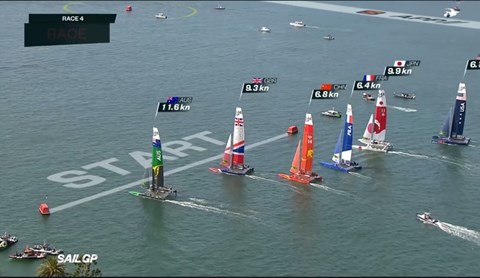 The last fleet race started with Australia and Japan tied on 37 points, the British in third with 30 and then France on 26. They all wanted a place in the match race final, but it was Japan that came out all guns blazing – attacking a (rare) weak Australian position in the pre-start as we see in Image 8. Outteridge held back Australia, USA and the Brits on the line and perhaps thought he could push Slingsby back far enough to get another opponent in the final – if so, he was ambitious. 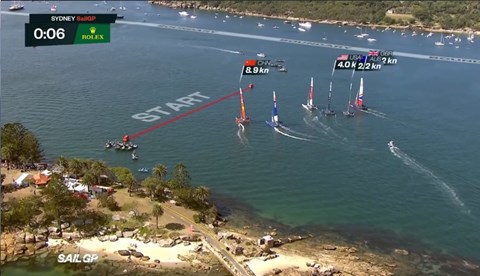 Tom Slingsby and the Aussies made exactly the same move that had allowed Japan to recover to the win in Race 1 – gybing early and to windward of the rest of the pack at Mark 1 – as we see in Image 9. They were already past the Japanese and Americans on the strength of the manoeuvre.

One more beautifully executed gybe took them past the French boat – who struggled with the manoeuvres all weekend. And that just left China – a scalp the Aussies collected soon after as we see in Image 10. This was just about smooth sailing – they kept the boat at 20+knots virtually the whole way down the leg, while everyone else dropped it off the foils or slowed after the gybes.

It wasn’t quite game over, as Australia were a little high on the layline for the gate at the end of the second leg, and China closed back up as they rounded. Slingsby tacked away to more breeze on the right-hand side and was ahead at the next cross. Now it was game over. 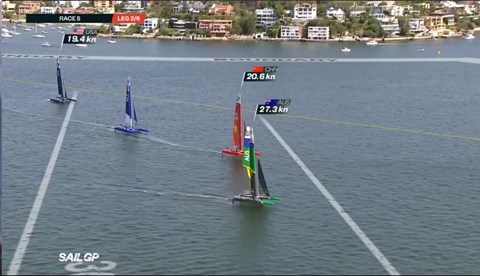 Tom Slingsby and Australia’s position at the head of the fleet racing rankings gave them the choice of entry for the match race final against Nathan Outteridge’s Japanese team. Unsurprisingly, Slingsby took the powerful port entry. The Australians crossed Japan comfortably, sailed to the boundary and then turned and led back towards the line as we see in Image 11. 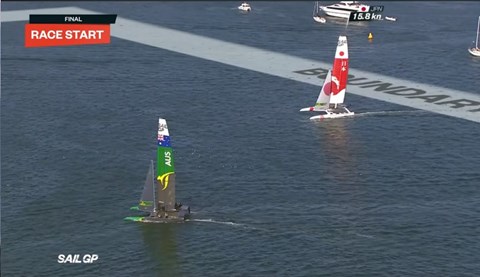 The Australians were slightly early, but they killed the time beautifully and it came down to the moment in Image 12. Outteridge had been a little slow to start chasing Slingsby back to the line, and when he finally got in a position to get hooked to leeward Outteridge either decided he didn’t want the leeward end – even though it had been a winner all weekend – or didn’t have enough time left on the clock to make it work. 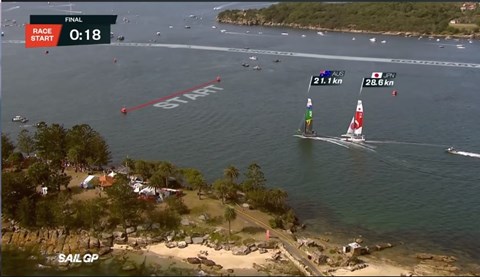 Instead, Outteridge luffed to windward of Slingsby and separated to get clear air. Both boats accelerated and hit the line together as we see in Image 13. Australia were slightly ahead, Japan were three knots faster – but Slingsby had the controlling position to leeward. 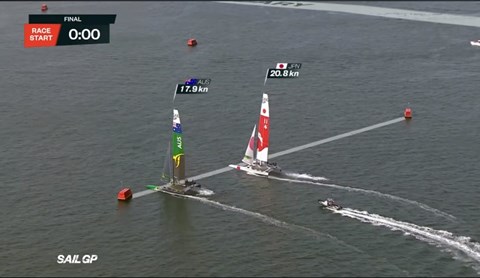 Tom Slingsby decided to use his control, and luffed Outteridge in another well-executed manoeuvre as we see in Image 14. Slingsby got Outteridge high and slow, then led the reacceleration to build a clean 100m lead into Leg 2. And that was all she wrote.

And so Australia took the first ever SailGP weekend in front of a very happy home crowd – it was down to a mix of good start-line positioning, solid manoeuvres and minimal mistakes. I doubt very much that that will be enough to win by the time we get to Marseille. 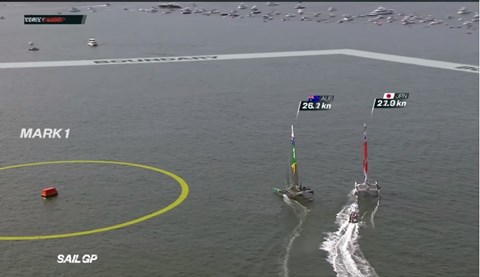 Sign up below to be the first to read our expert SailGP blogs, news and analysis

Follow us on Social Media to get the latest updates on SailGP.